Through many conversations, some with people I know well and others with those I have met briefly and will probably never see again, I continuously hear the same mantra: Men don't hit women. It's criminal. Any man who does should be thrown in jail. The response is immediate and visceral. However, when I pose the reverse, there is rarely an immediate reaction. Most people will say that a woman hitting a man is also wrong, but there is no passion behind the statement. There are few threats of police action, even less support for jail time. No one (yet) has said they would go and beat the woman for beating the man. Why is this?

The simplest reason is also the one both men and women fight the hardest. Stereotypes. No woman wants to be stereotyped as weak or helpless, but that image is what people (unconsciously) draw from. Women, in general, are physically smaller and lighter than men. On top of this, stereotypical women are not violent but nurturing, and know how to keep the men in their life happy. So taken together, when a woman becomes angry or violent, many perceive the situation as non-violent without seeing it. Take for instance this painting by the famous American artist Norman Rockwell. 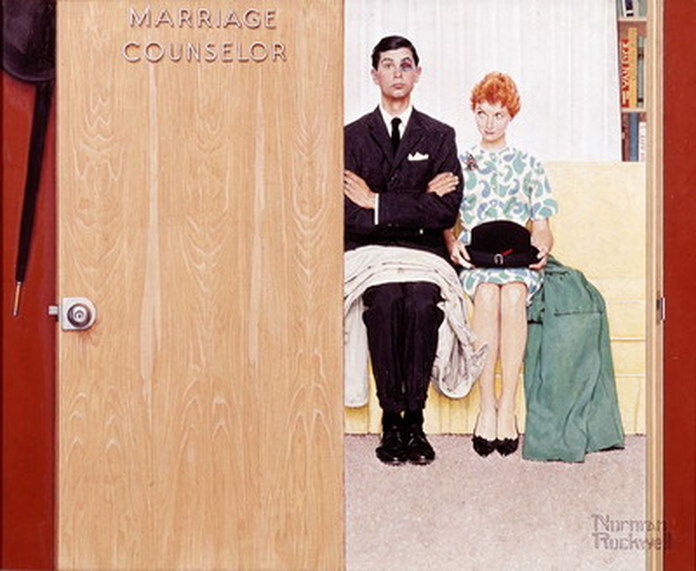 How is the above situation treated? What does it show? How is what you perceive different from what you see? Now imagine the roles reversed. What if the wife was sitting with her arms crossed, sporting a black eye, while her husband gave her a sidelong smirk? Would we be chuckling then?

Add to this the male stereotype. He is brawny, active, and in charge of his life. He is in control of everything around him. He is self assured, smart, and just like the stereotypical woman, he knows how to keep his partner happy. Most importantly, he is not a woman. These traits were succinctly illustrated in an Old Spice commercial campaign from the mid-2000's.

Who could imagine such a man being abused by his wife or girlfriend? Who would take him seriously if he said he was afraid of her? Who wouldn't brush it off if he said that his partner's constant name-calling, criticism, and insults were robbing him of his self-worth? They would tell him to suck it up, brush it off, and ultimately, to be a man. As Alexander Detschelt stated, "News headlines regarding domestic violence against men have been phrased in such a way as to be sensational and evoke humor. Even more recently and on a national level, the issue of domestic violence against women has received significantly increased attention since the murder of Nicole Brown Simpson. Unfortunately, the media has not presented similar incidents of domestic violence against men with equal fervor, as evidenced by the Phil Hartman tragedy. These societal reactions and media perceptions are in keeping with the unfortunate, stereotypical view society holds of men as being sturdy and women being the weaker, more helpless sex... Due to gender stereotypes regarding domestic violence against men, social ridicule is the fear that confronts male spousal abuse victims. Men perceive society as expecting them to be the strong, dominant party in their intimate relationships, and therefore are less willing to report incidents of domestic violence. Men are less likely to call law enforcement, even when there is an injury, because they feel shame about disclosing family violence, especially since the police adhere to traditional gender role expectations."