This reason for remaining in an abusive relationship is not the sole territory of abused women. Contrary to the stereotype, many men do love and care for their children. They also know that in most cases of divorce, the mothers will receive the better deal when it comes to custody of the children. With both this and knowledge of their partner's abusive tendencies in mind, many male victims of domestic violence will remain in the relationship rather than surrender the children to an unknown and likely abusive situation.

"If it weren't for our son I would've left a long time ago. However, he needs me and I can't bring myself to let go of him. And who would my wife vent her rage against if I were gone? I know these are lame excuses to some but they are valid when in the position described."

Shame and Fear
While both sexes experience shame when they suffer abuse at the hands of a spouse or lover, men have the added pressure of having society at large ridicule or outright dismiss them. As Philip Cook has pointed out, "Their problem is viewed as of little consequence, or they are to blame, and their are few available resources for male victims. Three-quarters of the men who contact an abuse shelter or hotline report that the agency would provide services only to women, and nearly two-thirds were treated as the abuser rather than the victim".


The case of Tiger Woods comes to mind. In late 2009, the police were called to the Woods' home on a report that Tiger's SUV had been involved in a single car accident. It was later revealed that his wife Elin had chased her husband's car down the driveway yelling and swinging a golf club, ultimately breaking the rear window and causing Tiger to lose control of the vehicle, because she had discovered his infidelity. The ridicule was almost immediate. Even Saturday Night Live ran a skit spoofing the incident. Tiger apologized profusely for his indiscretions, but Elin is not on record as having ever apologized for attacking her husband. To this day, people still chuckle over the idea of Tiger Woods being physically assaulted for his affairs. To date, Elin has suffered no repercussions. In fact, she received $750 million and sole physical custody of their two children in the divorce settlement. With this glaring example in front of them, is it any wonder more men do not come forward?
"Although we recognize that some serious husband battering does take place, it is not a social problem of the same proportion as is wife battering" - James Ptacek, 1988 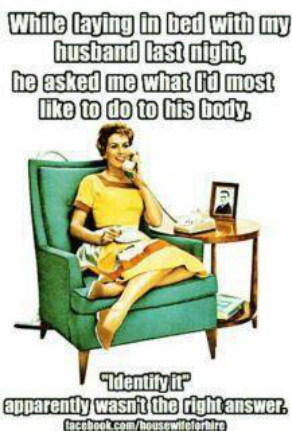